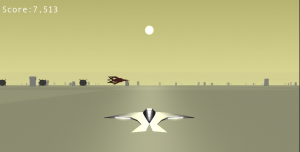 Wow, has it been 8 weeks already?

Something I’ve learned about game development is that every project has a few distinct stages when it comes to your mental attitude as a developer. The beginning is always a blast, because you’re trying new things, and putting all of your exciting ideas into the game. And the end is usually pretty great, because all the polish is starting to shine through and you can see the light at the end of the tunnel. It can be excruciating because usually you’re itching to move onto the next thing, but generally at this stage your work is clearly broken up into tasks that you can simply work through.

Then there’s the middle.

This is the awkward stage. All of the gameplay elements are in, but you’ve been doing nothing but stare at this game for weeks (or months, or years in some cases) and you start to lose some objectivity on the game. Is it fun? It’s hard to say. Does the aesthetic work? I think so, but everything looks alright to me at this point. Is the difficulty right? I can’t tell, I’m kind of an expert at this game now.

This is the stage we’re in right now. All of the essential pieces are here, but it’s somewhat hard to tell what exactly the next big steps are.

So what do you do to get from this stage to the home stretch? Well, one thing you can do is playtest, and get feedback from people who aren’t as close to the game. Sometimes  patterns of feedback will emerge that you hadn’t anticipated, and it helps you get past that hump and look at the game in a new way. We’re planning to do this in kind of a big way. We’ll be making an “alpha” build and putting it up on Kongregate.com sometime soon. This will hopefully result in a great burst of invaluable feedback, and if we’re lucky, a bunch of dedicated fans who’ll be eagerly anticipating the final release.

The other thing it will give us, is lots of statistics. This week, I got Google Analytics hooked up, so we can collect anonymous stats for things like:

This data will be great, because it’ll let us ask questions like: “If we make the stages 10 seconds longer, do people stay playing longer?”

1. we added a new type of entity to the game, which will appear starting in Region 4 if you make it that far. It doesn’t have a name yet, so I’m just calling it the “KillerBot” for now. If you have any ideas, we’d love to hear them!

2. We added this somewhat quirky system where random phrases will appear in the sky between stages. It’s still a WIP, we were thinking is that maybe we’ll make a system where users can submit their own “Race The Sun Poetry” and it would have a chance to appear in the game for everyone who plays.