The bad news: We don’t have a playable build this week. We decided to dig in and make some big additions, and right now the game’s in a bit of a messy state.

The good news:  we’re making great progress! We’ll have a build ready for Kongregate.com next week, with some solid new features that we’re pretty excited about!

We finally got around to adding something we’ve been planning for awhile: Player objectives and leveling:

This addition serves two purposes. First, it lets us unlock the game’s features slowly and teach people the game’s mechanics one at a time, and secondly, it gives you something to do other than try for a new high score. Once you meet the three objectives for a given level, a new pickup, player ability or other game feature is unlocked.

We’re trying to make the objectives interesting: In addition to some of the usual suspects (high score milestones, collecting X number of gems) we’re going to ask you to do things such as clear a number of Regions without colliding with anything, and to catch a speed powerup while soaring through the air.

Once you reach a certain level, we’re also going to unlock a set of daily “multiplier” objectives that are generated procedurally. These will be much more challenging, and if you finish one, you’ll get a 5% or so point multiplier for the remainder of the day.

We’ve been giving a lot of thought to how to separate the “demo” features from the full version features, and this leveling system will probably be a central part of that: The demo will feature around 5 player levels and a single daily objective, the full version will have at least 15 player levels (which means a lot more special abilities and pickups) and at least 3 daily objectives.

I tried turning on Unity’s dynamic shadow system, and it’s actually working really well, pretty much out of the box! We ran into some performance issues, but I think I’ve been able to get a handle on it. It’s starting to look like a real game! 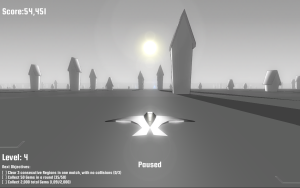 As I mentioned last week, we setup a Greenlight page for Steam, and so far it seems there are a lot of doubters 🙂
This feedback is a great thing, because it gives us some perspective on what the general public will think, and gives us a chance to tune the game’s look. But it also reveals that there are a few people who really seem to love the game already.

Through this experience, and the advice of several other indies who’ve gone before us – we decided that maybe it’s time we just take matters into our own hands and start selling pre-orders for the game right on Flippfly.com, and to use other platforms when the time is right.

This has a few distinct advantages:

We’re not quite ready to open the floodgates yet, but look for an announcement next week! We’re using a company called FastSpring to handle the payment processing, for a combination of a great rates (they take less than 10%) lots of payment options for customers, and great customer support, according to lots of other indies. We’ll probably setup the pre-orders in a way that looks somewhat like Kickstarter – with a few different tiers including soundtracks, perhaps a 3-pack at a discount, etc.

Of course, self-publishing will have its challenges. One of them is simply making people aware of your presence and website.

Hmm, if only we had a newsworthy story…
Stay tuned 😉