Stepping out on a ledge..

Hey all, thanks for reading!
Forest and I decided that from here on out, we’re going to do a weekly development update, and just be really transparent about what we’re working on, including a playable build so everyone can see our progress and provide gut-wrenching critical feedback. Or something like that.
It’s a bit scary to just take our work-in-progress stuff and put it out there in the wild: what if someone steals our idea or our actual game? What if we ruin our chance for an awesome PR reveal? What if everyone decides that our game sucks and doesn’t buy it because we’ve put a bad taste in their mouth? What if everyone decides our beta build that they already have is awesome, and that they don’t need to buy the final product?

But we decided that the benefits outweigh the risks. We’d rather be the type of company that’s transparent, and that has a two-way dialog with our fans. Hopefully in return, everyone will give their honest feedback, and our games will ultimately be better for it.

Going forward, we’d like to do a video each week, but we’re not quite setup for recording this just yet, so text it is!

One night a few weeks ago, I was inspired by a Google Sketchup scene I threw together when I was bored: 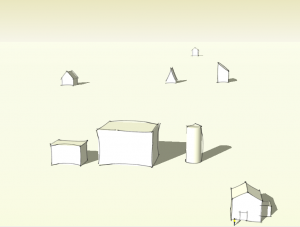 And so we started thinking about ways to turn this into a game, just because it felt cool and unique. The idea of flying through this type of simplistic, abstract space at really high speeds seemed appealing, so I started prototyping in my spare time.

The  premise of the game is that you’re in some kind of solar-powered craft, and your goal is to get the highest score possible by maximizing your distance before the sun goes down. Powerups along the way will give you bursts of speed, thus extending your life a bit. Other pickups give you extra points, and the ability to jump over obstacles. It occurred to me after a few days of working on this that it has a lot of similarities to Tiny Wings, which is cool because we really dig that game and how it works.

Before I talk about more of our design and development decisions, here’s a Unity web build of the game as it is right now, built this very hour!

Controls:
Left/Right arrows (or mouse, although it’s not particularly tuned)
Up Arrow/Spacebar will activate the blue jump powerups.

Credits: Our temp music comes from the excellent NoSoapRadio:
NoSoapRadio (DeceasedSuperiorTechnician) / CC BY 3.0

We’ve made a few key decisions about the game:

And that’s about it for now! Most of the decisions we’re making are done on-the-fly. What’s awesome about a project of this scope and style is that we can change directions very quickly and with little cost. So we’re trying to take advantage of this by staying flexible and agile with our design iteration.

Given that it’s just the two of us working on this, we made the decision to not schedule out the entire game’s production from start to finish. An excellent GDC talk from Daniel Cook called “Create new genres (and stop wasting your life in the clone factories)” reminded us that if we really want to create something awesome and fresh, writing down the design for it ahead of time would be kind of an enemy of that goal.

So instead, we’ve decided to work in smaller sprints, and to make a playable build every day. This will let us try lots of things, and hopefully arrive at a place that’s ready for shipping fairly quickly.

At the same time, we don’t want the game to drag on forever or be subject to bloat – so we decided that we’d make a goal of making a publicly playable “beta” build within about one month, and put it up on Kongregate.com in the Unity section. This should let us collect lots of feedback and play session data, and really build a game that’s unquestionably, statistically awesome. We’re also hoping that we can put an email sign-up form right in the game at that point, and start building up a bit of a following that we can send out email blasts to when we make official releases.

That’s it for our first development update, we hope you enjoyed it!