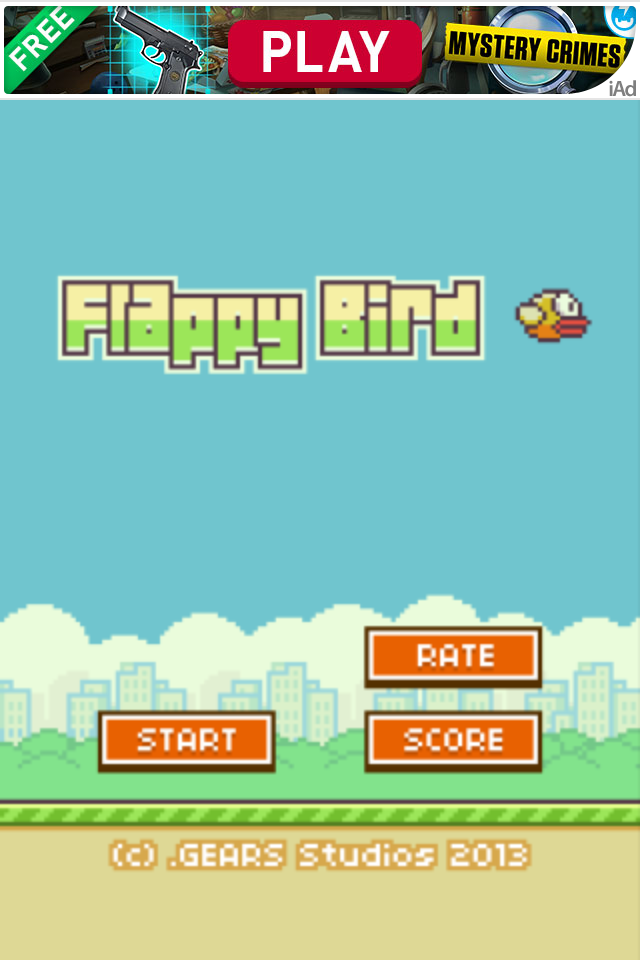 There’s been a lot of talk about Flappy Bird lately. For those who somehow haven’t heard about it – it’s a mobile game from an indie developer in Vietnam named Dong Nguyen.
Over the past few weeks, it’s taken the mobile gaming world by storm, climbing up to the #1 spot in the app store. This is pretty rare these days, because publishers spend tens of thousands of dollars every week to acquire enough new users to maintain their chart position.

Long story short: the internet kind of exploded on the game and its developer. Blogs sprang up accusing the developer of cheating the chart position and cloning other apps, and Kotaku even ran a piece with a headline claiming the developer had stolen art assets from a Mario game (They later published an apology, because clearly this wasn’t the case.) And at the same time, millions of players were playing the game – a LOT. All of this attention seems to have been too much for the creator, who subsequently removed the game. The app’s success had completely changed his life, and it was too much for him.

There are lots of interesting things going on here, but I find two things particularly noteworthy:

There’s really no other way to put it: Lots of people – especially game developers, hate seeing a simple mobile game, which was created in perhaps a few weeks, go to the top of the app store and bring this much attention and money to its developer. One struggling mobile developer took to the Touch Arcade forums, calling the game a “punch in every developer’s face.” All week on Twitter, I’ve been watching a stream of  vitriol towards the game. When I stated what I thought were the game’s qualities, one developer friend said “It’s just Flappy Bird. Get off your ivory tower.”
Another friend posted on Facebook:

“Can we all *please* shut up about Flappy Bird already? I have never in my life seen so many people yammer so incessantly about such a simplistic, derivative, uninspired, flat-out mediocre game.”

I think there is an underlying attitude here: Simple mobile games aren’t the “real” games. It’s OK to analyze a AAA masterpiece like Bioshock Infinite – there are interesting things here to talk about. But really, this guy just got lucky, and there’s absolutely no point in discussing the qualities of the game itself. It’s Just Flappy Bird.

I think we would all do well to have a bit of empathy and appreciation for our fellow game developers. Not all of us are making 5-year masterpieces – and that’s OK. Some of us want to paint the Mona Lisa, and some of us are happy to make pencil doodles.

I personally am happy to see an individual who’s able to make something that millions of people enjoy, and that can compete with the likes of Zynga and King for the top spot on the app store. This gives me hope, and it makes me happy to see another developer succeed while doing what he loves.

2. The Underappreciation of Quality

Game developers tend to be fairly isolated. We find our area of expertise, and we get really good in that area. And unfortunately, we sometimes miss the forest for the trees when it comes to games outside of our personal comfort zone, completely dismissing the reasons that others appreciate them. I saw this with Angry Birds, I saw it with Minecraft, and it’s happened again with Flappy Bird.

“He just got lucky.”
“There are lots of better games out there that failed.”
“He only succeeded because it looks like Mario.”

Now let me say upfront – Flappy Bird got lucky. There are a lot of factors in success, and many of them are outside of the developer’s control. In this case, I suspect that a “let’s play” from “PewDiePie”, Youtube’s biggest star, probably had a lot to do with the game’s meteoric rise.

But at the same time – I think it’s worth pointing out and appreciating Flappy Bird’s qualities. I believe all of these things are factors in its success. And especially for anyone interested in making mobile games – it’s worth looking at these traits objectivity and appreciating them for what they are. These are the things we can control as game developers.
Here are the qualities I see in Flappy Bird:

Flappy Bird has visual qualities that we immediately recognize. First – the pipes. They remind us of Super Mario pipes (even though they have nothing to do mechanically with that game.) and the world looks like the NES games we played as kids, which makes the game immediately approachable and recognizable.

Secondly, the mechanics and character resonate with the real life. You’re not controlling a futuristic robot spaceship – you’re controlling a bird, and the play mechanic matches the game’s name. Seeing the game’s name and a screenshot is enough to tell you how the game works. You know everything you’re getting before you download it. How many games is this true for?

The game is simple. It has one mechanic, and the mechanic is visible in the game’s screenshots. It can be played with one finger, and requires no tutorial. I can describe it in a sentence to virtually anyone I know. This is a powerful thing in mobile games – or really any game.

The game is brutally difficult. It takes most players several tries to get past the first pipe or two. While many modern mobile and casual games are going out of their way to not frustrate players – Flappy Bird taps into our desire to overcome. This is a quality of games that I think we’ve forgotten how to appreciate.

The game makes it very easy to share scores to Twitter or Facebook, and this works closely together with the  the Difficulty trait. Together with the fact that many of your friends are playing, this creates a form of meaningful social interaction around the game. It’s fun to compare your scores with others, and this game makes it easy.

The game is tiny. On my iPad, it loads in less than 5 seconds. And once you’re in the game, it starts with a single press. There is no text to read, no tutorial. In less than a minute from the time you decide to download the game, you are playing the game. A few seconds later, you have played your first round, and a single button will let you play again, or share your score.

The game is appealing. It doesn’t have the visual polish of something like Tiny Wings – but it’s visually consistent, has a nice color palette, and is super approachable. The flapping sound, as well as the sound when the poor bird hits a pie (combined with the flash and screen shake) also have a very satisfying feel. It’s juicy.

There you have it. Flappy Bird may not be the “most fun” game out there, or the most addictive, the deepest, the most satisfying, the most visually polished, or the best at <insert some quality trait here.>
But I think as game developers, it’s worth appreciating the game for the quality traits it does have, rather than dismissing it outright, or worse, deriding it for the success it found.

I’m glad to hear the developer will keep making games, and I’m personally looking forward to playing whatever’s next from him.