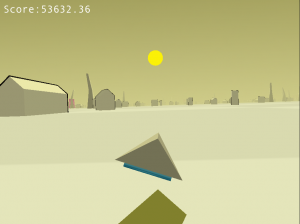 Hello dear readers. Here’s our week 3 production update for Race The Sun.
For being 3 weeks into full production, we’re pretty happy with how the game is progressing. We’d love to hear your feedback in the comments! Our latest build is embedded at the end of the post, as usual.

Gameplay
Last week  we decided to try a scheme where the player’s speed increases gradually.
Now, we cranked it up another notch – your speed increases by 50% each stage.

This makes for a pretty insane speed. We’re hoping it’ll make the game both exciting and memorable! It’s definitely a test of reflexes once you get past stage 6 or 7.

Other gameplay changes: Jump powerups stack now, and all of the pickups are about the size of a building, so they’re pretty easy to grab, especially in the early stages.

There’s a lot of balancing to be done, so just have fun with the experience for now.

Audio
Forest did a lot of work on music this week. It’s all still a work in progress, but let us know what you think!

We pretty much shelved the idea of doing fully procedural music, in favor of a simpler system where a music track is played each stage, with some stage transition music. As neat as the procedural idea was, it was starting to take a lot of our time, and for a non-central feature, that didn’t seem like a good thing – especially this early in production.

Soon we’d like to try adding “whiz-by” sounds for the buildings with a doppler effect on them – it should really help make the game quite a bit more atmospheric and intense.

Tech/Optimization
Boring programming details!
I spent a couple days this week trying to get the game to run at a smooth 60 fps on the New iPad. I’m not quite there yet, but I’m convinced it can be done, and hopefully on slightly older devices too.

A lot of this involved helping out Unity’s physics system (which is actually physX) by turning off collision on buildings that aren’t near the player. I gained back about 5 ms of physics time, in exchange for < 1ms of script time. Apparently having 500 or so active “static colliders” in a scene is a bad thing.

The other big chunk of our frame time is going to CPU time categorized as “rendering.”  – I think I may be able to reduce this by combining rows of buildings programmatically, which should hopefully get our draw calls down some. We’re only drawing about 20k verts, but draw calls are around 35, which I think is a bit high if our target is 60 fps. The GPU seems to be in decent shape – pretty much everything in the scene is either vertex lit or using a simple mobile diffuse shader. And at the moment, all the buildings share a single material.

For now, we decided to switch gears back to PC and just make the experience awesome there. We’ll come back to mobile later!

Steam hadn’t been our primary focus before – and we’d still like to sell the final version of Race The Sun directly from our website. But this could be a great opportunity to get it in front of more eyes.

So one plan we’ve been talking about goes something like this:

1. Keep prototyping until around August 1st and try to make a really solid “Beta” build.
2. Put this Beta up on Kongregate.com in their Unity section. This should help get us thousands (hopefully hundres of thousands) of plays that we can analyze,  player feedback, and more attention on the game from the gamer community at large. The goal is to take what we believe to be good, and keep tuning it until a community of players agrees.
3. Once we’re happy with the results, finalize the game’s features and polish, and go for Steam through Greenlight.