Hey all, we’re really excited to announce that  our partner BrassMonkey is doing a massive giveaway, to celebrate the release of Race The Sun on PlayBrassMonkey.com, and the first of its kind integration of BrassMonkey technology into Race The Sun’s standalone version! 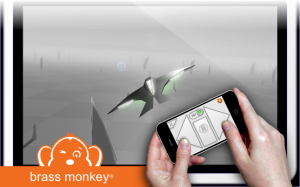 Prizes will include a Founder’s Club subscription, copies of Race The Sun (with soundtrack,) BrassMonkey coins to use on their website, and even a 3D printed version of the player ship from Race The Sun!

Here’s BrassMonkey’s announcement post, with all the juicy details:
http://blog.playbrassmonkey.com/2012/12/19/race-the-sun-giveaway-announced-and-brass-monkey-on-your-desktop/