Hey all, here’s our week 2 production update for Race The Sun, Introduced last week
[Skip ahead to week 3]

First – here’s a concept Forest put together for a player ship – what do you think? 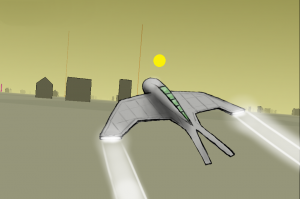 This week we decided to try a different basic gameplay formula: Instead of the sun going down at a constant rate, it goes down a bit between stages, and the speed powerups reverse it a bit. Additionally, your speed increases just a bit each stage.

This makes the game much more intense! I guess you could say it’s closer to something like Temple Run now in terms of gameplay formula, where before it was more like Tiny Wings. Higher stakes, more intensity, more difficult – and we think a lot more fun.

We also spent a few days prototyping some procedural music stuff. We wanted to see if we could come up with a set of loops that would synchronize perfectly with the grid on the ground. Ultimately we decided this didn’t work for us, because the music would have to either continually speed up with no limit, or reset to a slower speed, which takes a lot of the momentum out of the game’s intensity.

Left/Right arrows (or mouse, although it’s not particularly tuned)
Up Arrow/Spacebar will activate the blue jump powerups.

Credits: still a bit of temp music  from the  NoSoapRadio:
NoSoapRadio (DeceasedSuperiorTechnician) / CC BY 3.0