This is part 2 in a 3-part series on the experimental features we are attempting in Race the Sun (part 1 can be found here). If you like what you see please help Race the Sun get on Steam by voting on our Greenlight page

In my last post I talked about our multiplayer system and how it represents a different approach to the way people play together online. This post will cover the built-in world-creation tools we are including with Race the Sun. Although level / track editors are not uncommon in gaming, we have tried to rethink how they work. Our goal is to give the player unprecedented power to create, while keeping things simple and “non-programmer” friendly. The result is a set of tools we call the Simplex World Creator.

For starters, let me tell you how the World Creator came to be. We knew from the beginning that we wanted the worlds of Race the Sun to be procedurally generated. Completely hand-designed levels would take forever to create – and would make replays of the game increasingly boring. Our original alpha used a system that randomly scattered objects across the world and increased their density as the player progressed. This was fun, but the lack of human touch on the design was evident and things felt way too repetitive. To remedy the situation Aaron recreated the world out of smaller pieces – each of which could be hand-designed with a special “pattern editor”. This gave us a best-of-both-worlds scenario where the world could be reset randomly each day, but still feel like it had a human touch. Releasing this tool and allowing our players to create their own patterns seemed like a natural fit. About the time that we were launching our Kickstarter the innovation part of Aaron’s brain kicked into overdrive and he came up with a system that would not only let players place objects in patterns, but would let them create the very objects themselves and animate them without any programming knowledge. The tools proved to be so efficient that we were able to create all of the obstacles in the game in about two weeks (essentially recreating the entire game while our Kickstarter was going on).

The World Creator was given four distinct modes that let players create and edit different aspects of the world. They are: 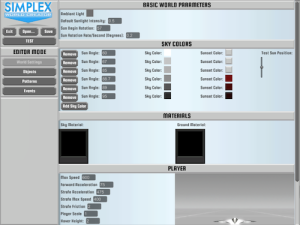 World Properties: This mode allows players to edit the global settings for a world. This includes lighting, sun behavior, sky color, sky and ground materials, ship physics, camera position and more. Changing a few things here can have a profound effect on the style of play in a given world. 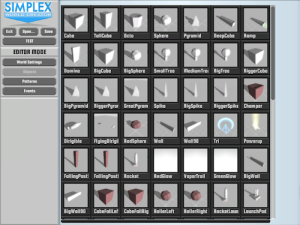 Objects: This mode allows players to create and edit objects. A new world will start out with no objects, but they can be easily made out of primitive shapes. Each object created can then be placed into a pattern – which is in-turn spawned into the world. 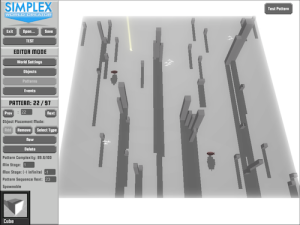 Patterns: This mode allows player to place objects into a 64×64 grid (a pattern) and set the conditions under which that pattern will spawn. Creating complex arrangements of objects is as simple as choosing an object and clicking where you want to be. Patterns can also be strung together to create longer and less random areas. 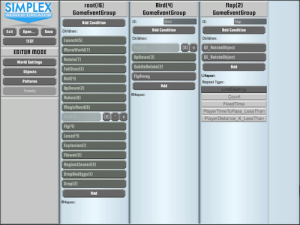 Events: Events could be thought of as small programs that can be run on any object. These could be things like animations, color changes, or sounds – they are what adds interactivity and motion to a world. This mode lets creators get ideas into the game fast, and gives non-programmers a bit of programming power. As a non-programmer myself, I find this incredibly fun and liberating.

This video shows a bit of the Simplex World Creator in-action:

It’s All In The Game

We really wanted the world-creation experience to be fun and to feel like a game itself – and making players quit, restart, or compile was not conducive to that end. Although it took some pretty serious technical work we have made every aspect of creating or editing a world happen right in-game. 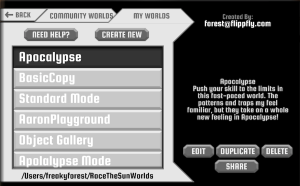 New worlds can be created, tested and shared without ever leaving Race the Sun. The cool thing about this is that players can discover and download other players worlds, and then play them immediately! Players can even rate player-created worlds and browse by rating. Our hope is that there will be a constant stream of new and creative worlds to explore, creating a fresh community-driven experience for every player.

It’s All About Community

We have taken a pretty serious risk by opening up these tools to our players. Customer support is hard enough with just two of us on the job, and this sort of thing could need a lot of support! We take comfort the trust we have in our players. We have seen how a community can come together and do great things (as in our Kickstarter) and we believe that putting this tool out there is a perfect opportunity for people to help each-other. To make that as easy as possible we host forums here on Flippfly.com and we have started a wiki for players to create tutorials.

The Simplex World Creator is now available to our beta testers via their Flippfly Account page.