What a crazy couple weeks this has been!

A couple weeks ago, we started talking about the situation we were in with Race The Sun. We had done a blog post talking about our sales numbers, and the difficulty of selling games without a big distribution partner like Steam – and it really seemed to connect with people in a big way. This got us to thinking, maybe it’d be cool to organize a sale for ourselves and other indie games that weren’t on Steam.

Long story short – we launched it last Wednesday at notonsteam.com, and with about a day left, we’re considering it a resounding success so far. We had our best sales day to date on the first day of the sale ($3.3k) which was also helped by the fact that our game was Greenlit for Steam less than two hours after we started the sale (on the irony!)

We basically spent the rest of the week keeping up with more indies who wanted to get in on the action. We decided we weren’t going to “curate” this at all, and basically let anyone in who asked us directly. We finally decided to close off new submissions at about 62 titles, just because of concerns that the website was going to take too long to load, and so we could take a breather over the weekend and focus on supporting the titles that were there.

I wanted to share just a few numbers and statements from some of the other developers in the sale:

“I was a couple days late in joining, but the notonsteam.com sale gave Spud’s Quest the biggest boost in figures and attention since launch day- very glad to be a part of it. The Flippfly guys know firsthand how hard it it is for decent games not on steam to get exposure and actually did something about it. Hopefully this can become a regular thing.” – Chris D (Spud’s Quest)

“I had the best sales day for Arcane Worlds too, more than twice the previous peak (which was caused by RPS article). Greenlight was going well during the sale too, and more people than usual contacted me about the game, both gamers and press.” – Alexey Volynskov (Arcane Worlds)

“For us, the Not On Steam sale has had the double effect of giving us enough sales of Particulars to prove that there’s life outside of Steam, while also handing us our best Greenlight day in a month! ” – Saul Alexander (Particulars)

I’ve also received lots of pretty graphs that look like this one, from Sky Nations: 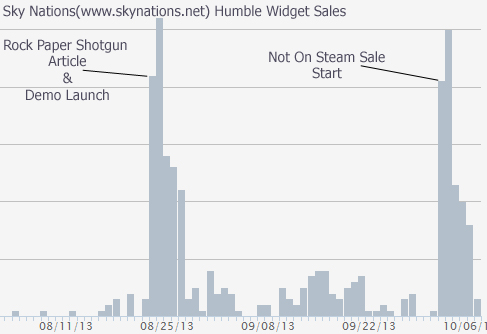 I think the lesson here is simple: Indies can achieve amazing things if we team up, do a little planning, and send the right message!

We’ll do a more complete “postmortem” of the sale later on – but for now: There is just about 1 day left, and we’d like to tell as many people as we can about the sale!