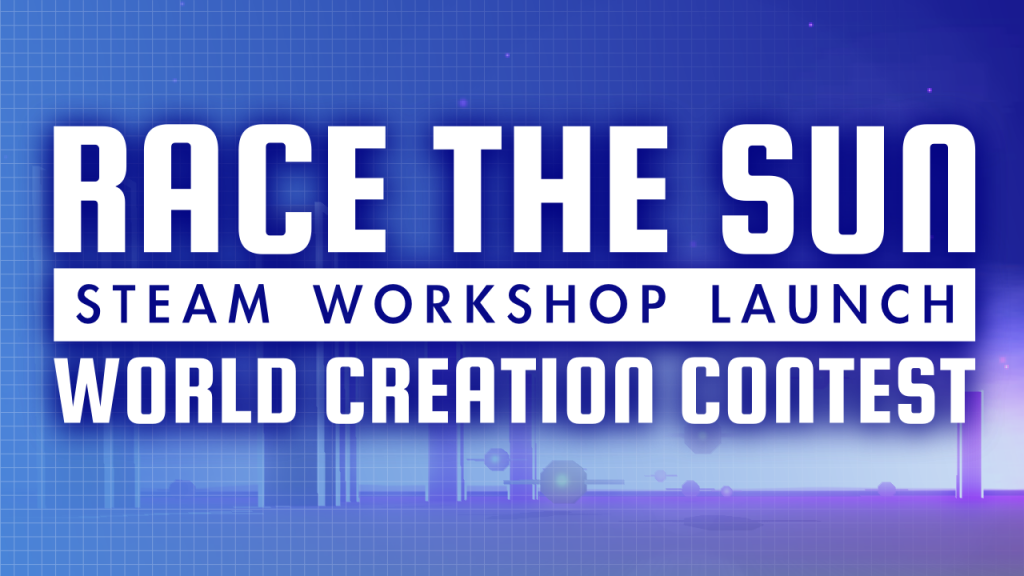 Workshop support for Race the Sun on Steam is live as of today, March 10, 2014. To celebrate we’re selling Race the Sun at 50% off and kicking off a level building contest.

To participate just submit a Race the Sun level you’ve created between March 10 and March 24th with the tag “Contest” on Steam. On March 25th we’ll announce as finalists and on March 28th we’ll announce winners.

Grand Prize (one winner): Your choice of either a $100 Steam Wallet card or a pair of 3 day passes to PAX East. Plus; a Race the Sun T-shirt, a signed Race the Sun Poster, 3 Race the Sun Steam Keys and a grab bag of Race the Sun Stickers and patches- plus a little something extra TBA.

First Prize (Up to 4 winners): A $20 Steam Wallet card, a Race the Sun T-shirt, a signed Race the Sun Poster, 2 Race the Sun Steam Keys and a grab bag of Race the Sun stickers and patches, plus the extra which we’ll announce during week two.

Runners Up (No Limit): Race the sun patches and stickers and a Race the Sun Steam Key – plus the extra which we’ll reveal next week.

Creativity – We like seeing new things created with the level editor! Show us new types of objects, new movement patterns, or crazy things we never imagined! Try to move beyond the types of objects you see in the existing built-in worlds.

Fun    – It should be fun to play your world. This is hard to define, but think about the gameplay. It can be challenging or easy, but make sure the user is having a great interactive experience, and not just watching a visual spectacle.

Polish – Take some time and make the world really look great. Think about the color palettes you use, the movement patterns the objects have, and the difficulty. Also think about making things change up as you progress through the regions – just like the built-in worlds.

Popularity – Votes through Steam workshop will be seriously considered during the selection process.